Percussion ensemble DoubleBeats (Berlin) wins 1st Prize and Special Prize of the Cultural Ministry of Japan at the 19th OSAKA International Music Competition 2018 after having been awarded also the 1st Price at the Universal Marimba Competition Belgium in 2017.
The finalists had to prevail against 1500 competitors in 15 different categories. Congratualitions to our artists!

Frisson is explosive! From New York City, the ensemble features the best and brightest of classical music’s rising stars drawn from many of the nation’s major music schools including Juilliard, Curtis, and Yale. Frisson showcases a myriad of rarely-performed masterworks like Beethoven Septet, Prokofiev Quintet, or the great Octets by Schubert and Martinů. A core piece in 2020 will be an arrangement of Beethoven’s 3rd symphony “Eroica”.
The ensemble debuted in major cities across the United States during the 2017-18 season and they are rapidly becoming one of the busiest classical music ensembles with over 30 concerts this season.

Rosenthal Musikmanagement will tour FRISSON exclusively in Germany and Europe in September 2020.

We are thrilled to announce the news that Rosenthal Musikmanagement now represents the Trio Zadig in Germany! This young French and American piano trio was founded almost four years ago in Paris, when childhood friends Boris Borgolotto and Marc Girard Garcia crossed paths with the American pianist, Ian Barber. In just a few short years, they have won several prizes in the US, France, Italy and Austria. Their charisma, passion and depth of interpretation regularly wins over audiences all over the world, from Shanghai City Theater to the Paris Philharmonic. The Zadig Trio is currently a resident of the Queen Elisabeth Music Chapel, alongside the Artemis Quartet. They are also the first trio resident of ProQuartet in Paris, and are generously supported by the Banque Populaire Foundation. 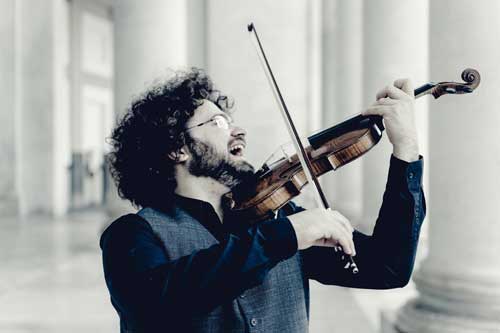 Congratulations to violinist Jonian-Ilias Kadesha, one of three artists to have been selected for representation by YCAT.

A member of Trio Gaspard, Junior Fellows in Chamber Music at Royal Northern College of Music Manchester, Jonian studied in Cremona, Würzburg and the Hochschule für Musik Hans Eisler in Berlin with Salvatore Accardo, Grigori Zhislin and Ulf Wallin. He is currently completing a Master’s at the Kronberg Academy with Antje Weithaas.

Founded in 1984, YCAT is a charity that builds the careers of emerging classical artists. It’s unique in providing sustained, intensive guidance, bespoke artist management and prolonged care over a 3 – 5-year period. Numerous RNCM musicians have been selected for representation over the years, including pianist Alexandra Dariescu, mezzo-sopranos Kathryn Rudge and Helen Sherman, and cellist Philip Higham.

This year, eight finalists were selected to perform at the final public auditions held at Wigmore Hall.

In the year that marks both the 25th anniversary of amarcord and the 275th anniversary of the – somewhat more advanced – Gewandhaus Orchestra, successful Munich-based composer Jörg Widmann has written a joint birthday serenade for the two outstanding Leipzig-based ensembles: “Kinderreime und Nonsensverse” (nursery rhymes and nonsense lines). This work, in which the humorous often merges into the deadly earnest, was presented in the Gewandhaus in Leipzig in April 2018.
“Widmann’s composition is literally tailor-made for the Amarcord ensemble. And since Wolfram Lattke, Robert Pohler, Frank Ozimek, Daniel Knauft and Holger Krause can sing anything that five men can sing, they can do that as well. (…) Every syllable, every facial expression, every gesture of the fabulous five fits like a glove, everything is merged into a comedian universe – to which the Gewandhaus Orchestra under the direction of Michal Nesterowicz makes a decisive contribution.”